Somewhere in England there are probably bird photographers who are sick of the sight of Marsh Harriers, but not here and not me! Those who inhabit areas like Norfolk probably have them feeding at their bird tables and heartily wish they would go away to make room for some "interesting" birds. 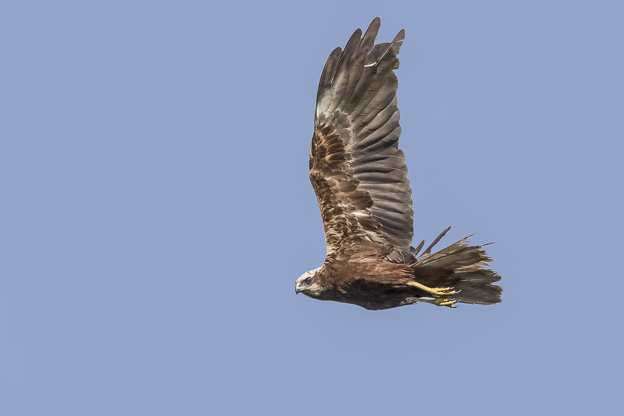 Here in Somerset however, they are not that common. They are very wary too. So to see one or, even better, get close to one is still a great thrill. Even better if the camera manages to focus on one and get a few good shots. 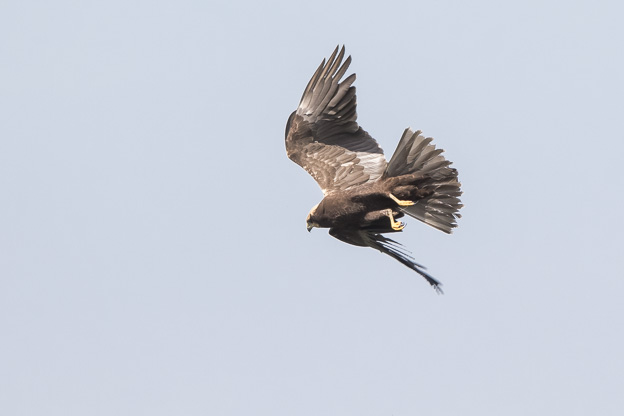 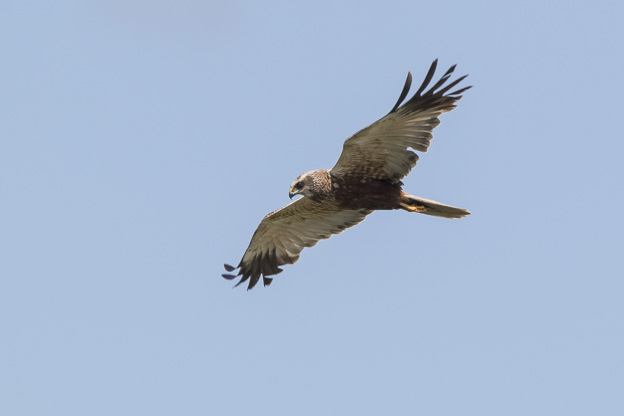 If you see one head-on, there is not that much to it. Obviously it pays to have a very low area and thereby keep drag to a minimum. 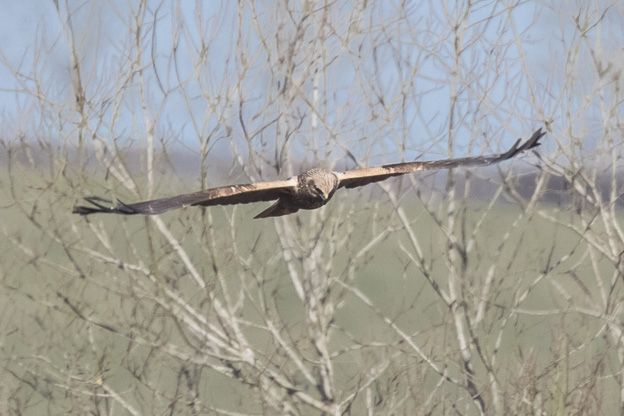 Whereas, seen from underneath, the massive wing and tail area becomes apparent. This is the perfect setup for low speed flight. Which is what Harriers do of course, just float about over the reeds looking for prey. 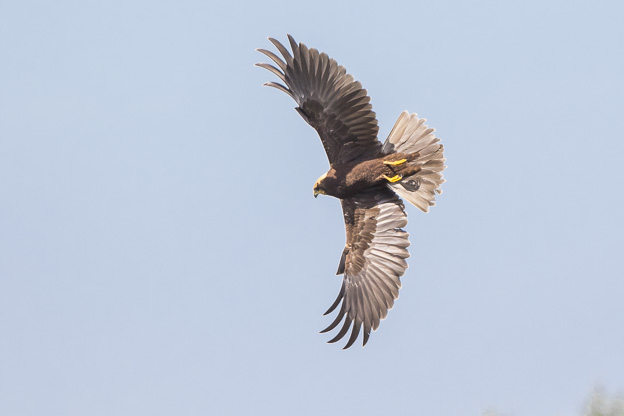 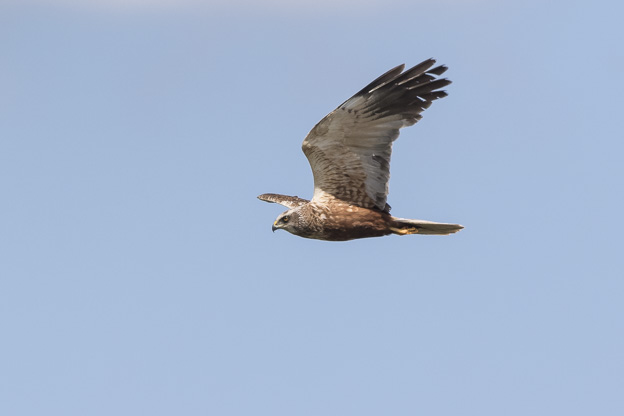 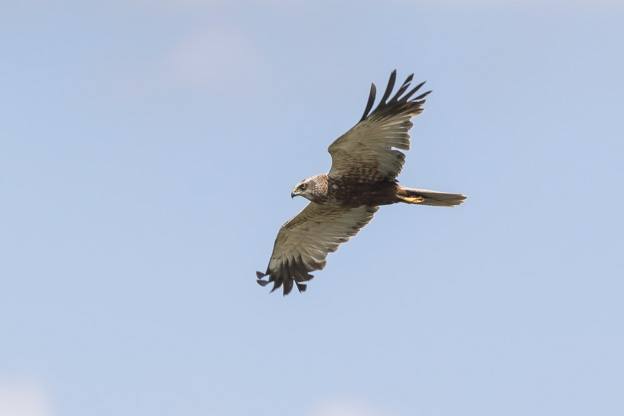 Even when everything comes together and I get one in my sights, and it looks to be near enough, it very rarely makes a good photo. Below is a young Harrier. That particular shade of chocolate brown always seems to produce a muddy, difficult-to-distinguish patch of confusion. Also, they are often against a bright sky so that you only see them in silhouette. 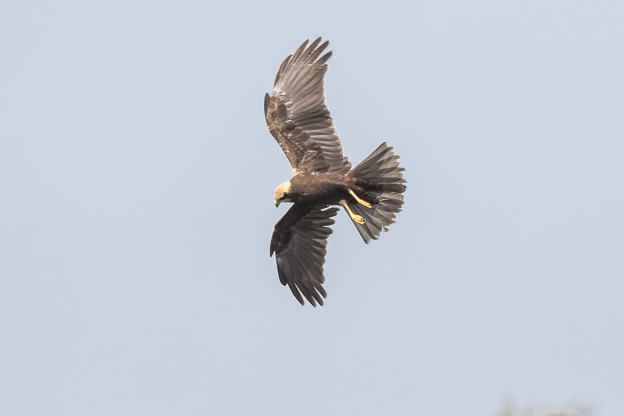 I know I sound ungrateful, but I have yet to get a Marsh Harrier photo that I am proud of. I will regard that as my project for the rest of my life! This is probably one of my better efforts from some time ago. 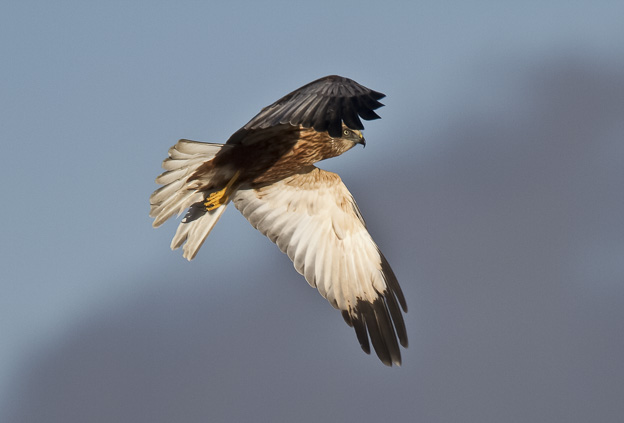 If we do not have that many Marsh Harriers, we at least have Little Egrets in abundance. 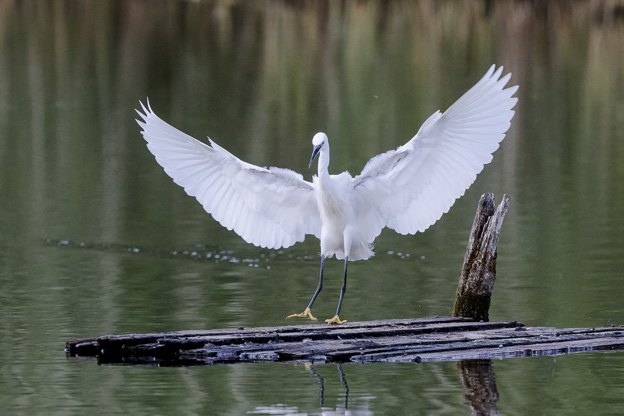 As I have said before, therein lies a danger - we could get sick of them. It is so easy to see Little Egrets in this area that we could forget to photograph them. So I was particularly careful to concentrate on this individual that I encountered at RSPB Ham Wall. When I first saw it it was doing something odd. 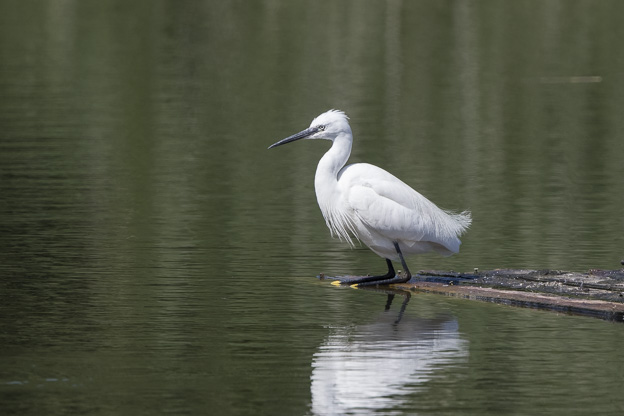 It was kneeling down. (Are those its knees?) It didn't take long to find out why. All the better to do this. 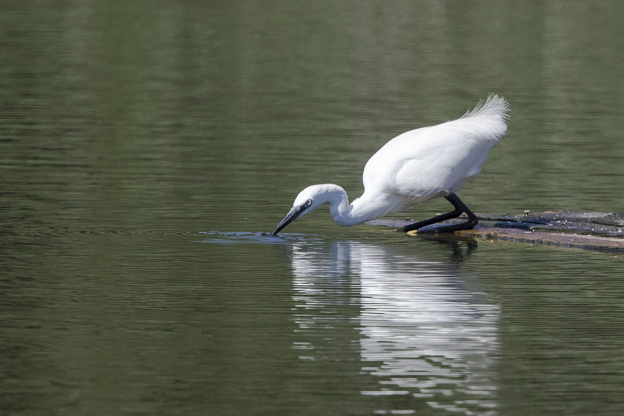 Stick your beak in the water and make dibbling movements to attract small fish. This is a common fishing ploy amongst Little Egrets. Actually, this is the individual that appeared in one of my earlier blogs. Its main fishing strategy is to fly along just above the water whilst trailing its toes in the drink to make a little disturbance. 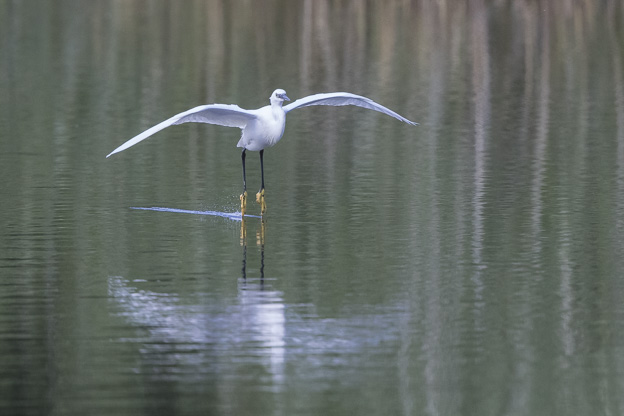 This often seemed to panic the small fry feeding near the surface. They would break the water surface and matey here would catch them. You can just about make out the fish splashes in the shot below. 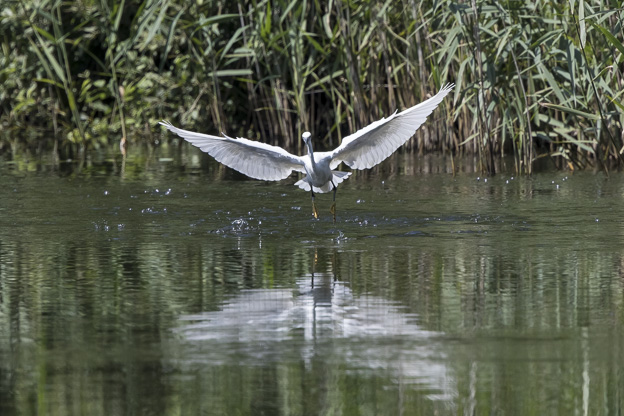 Sometimes it caught them two at a time. Perhaps you can see that in the next photo. It still finds time to do some fancy toe-trailing. 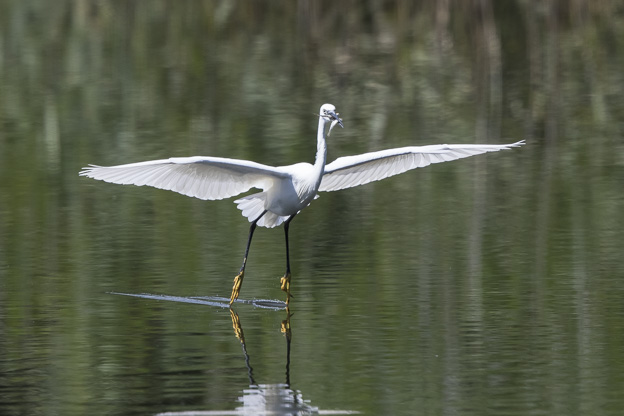 Sometimes it only caught one. 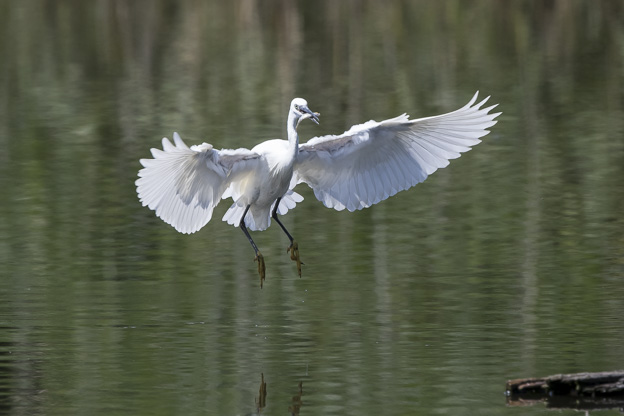 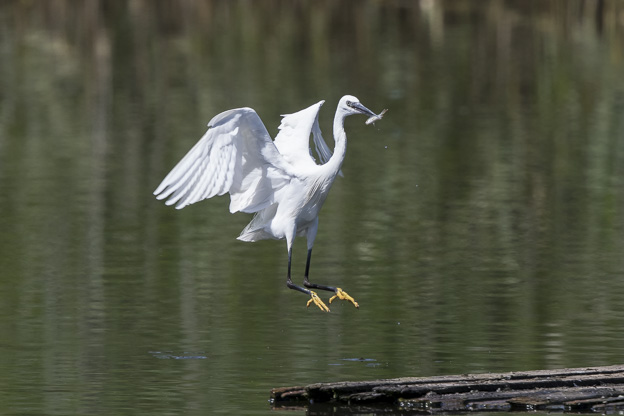 Most of the time it just posed about looking beautiful. 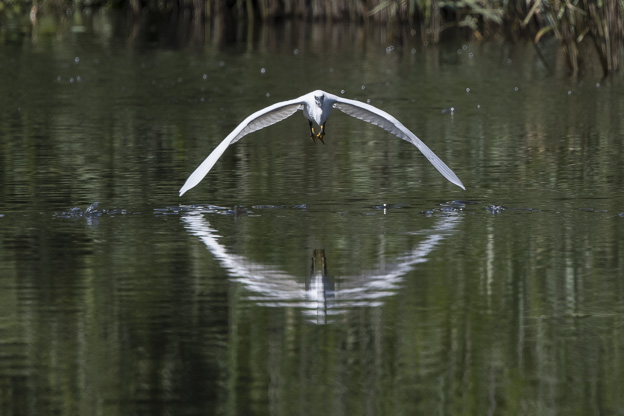 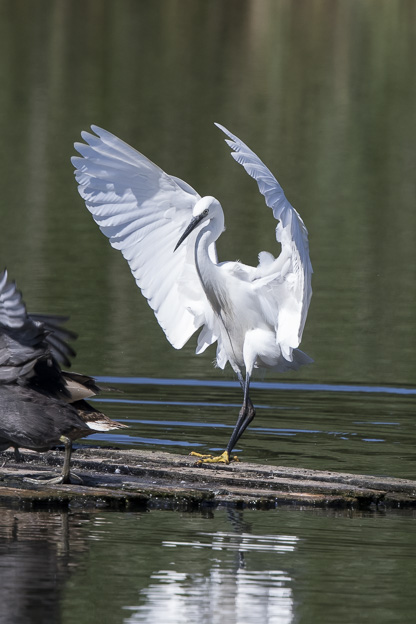 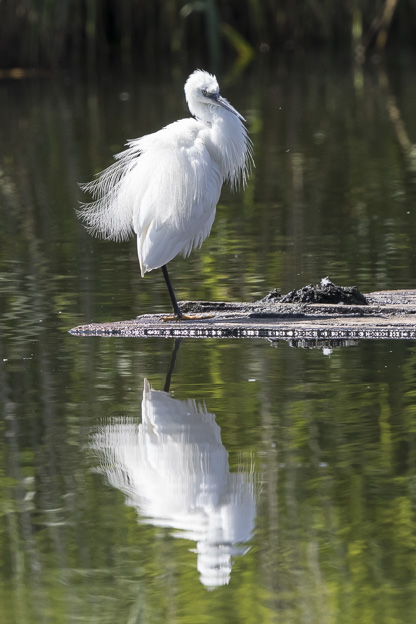 And sometimes it had to deal with deadly foes. 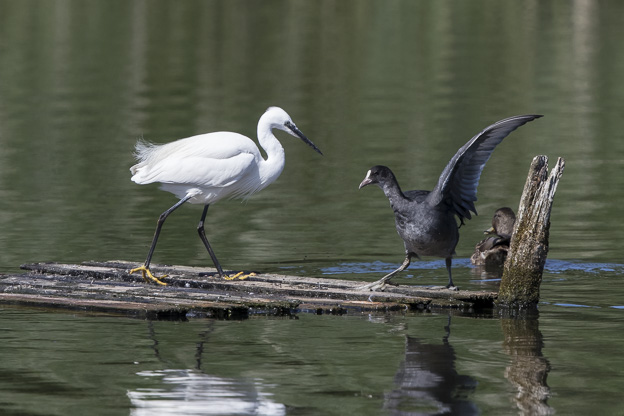 A young Coot is not as deadly as this villain though. 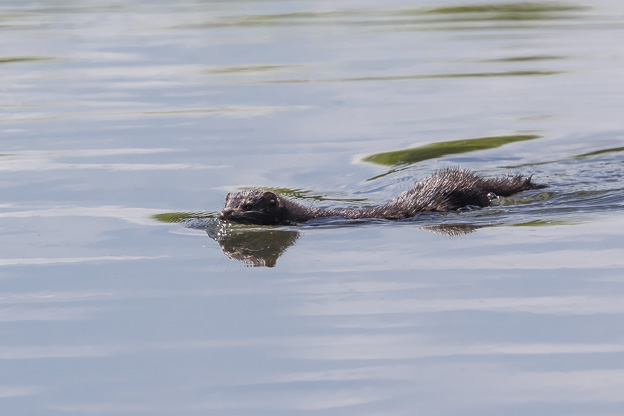 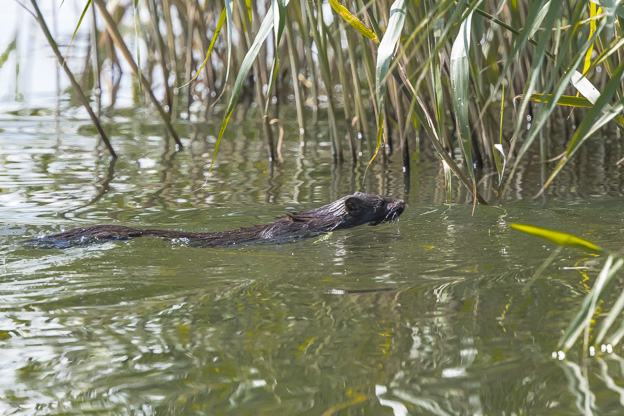 Yes, a Mink. In fact there was a family of four of the blighters. No doubt the RSPB will be having a word with them soon.

So you can see that despite it being a notoriously quiet time of the year for birds, I had a great day at RSPB Ham Wall. My last shot was of this Moorhen preening itself. You could also enter your email address at the top of the right hand column, that way you will never again miss a Blog instalment.