When I see what birds eat, and seemingly enjoy, I am grateful not to have to be one of them. Here for example is a Cormorant wrestling with its lunch. 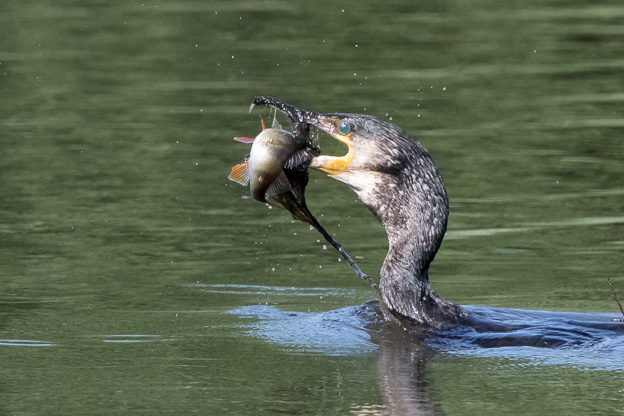 It has also picked up a fair portion of aquatic slime which it shakes off after swallowing the Perch. Even so, I do not envy it its lunch! 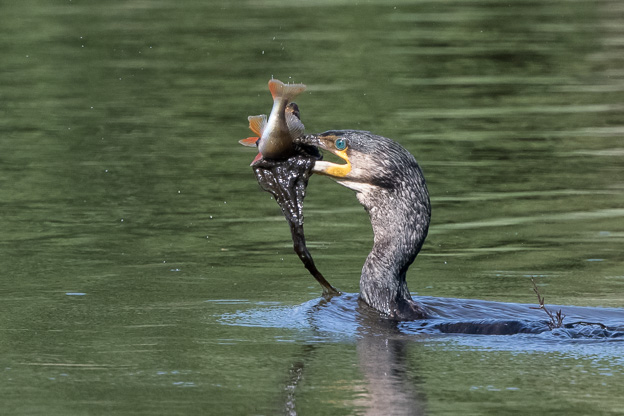 Even less these young Coot. Their mother is collecting Water Snails for them, which they swallow whole. 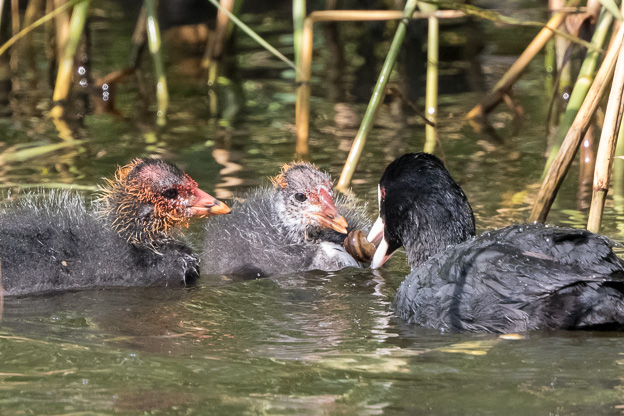 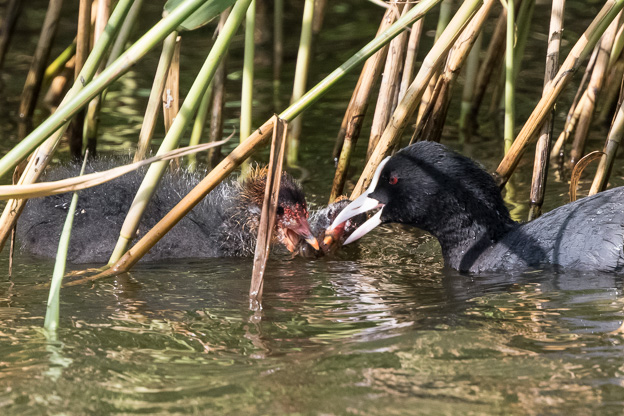 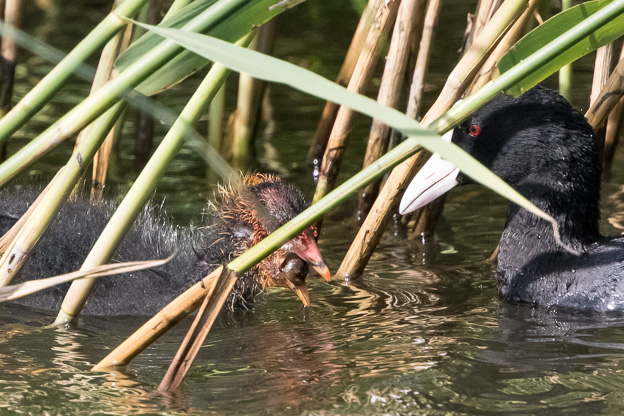 And to follow up, a big bunch of watery salad. 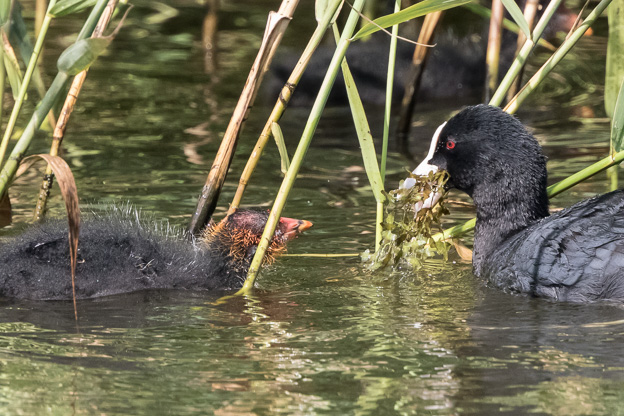 Much as I would not fancy any of it, it seems to be doing them some good. Just look at the vigorous hair growth!

So that made a good start to my day at RSPB Ham Wall and there was still the whole day ahead of me. I have been having some good luck with Marsh Harriers approaching closer than normal recently and I am always grateful for that. Still seeking that killer shot though. 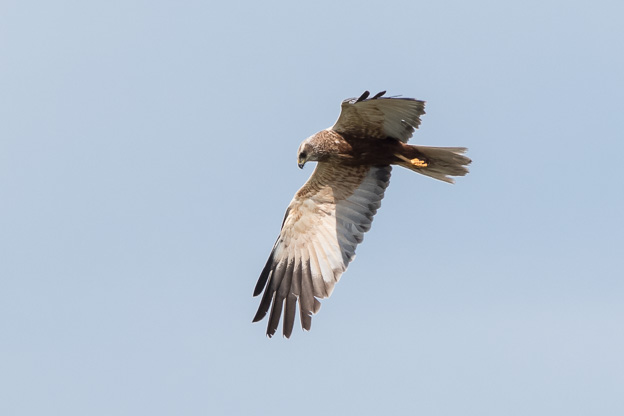 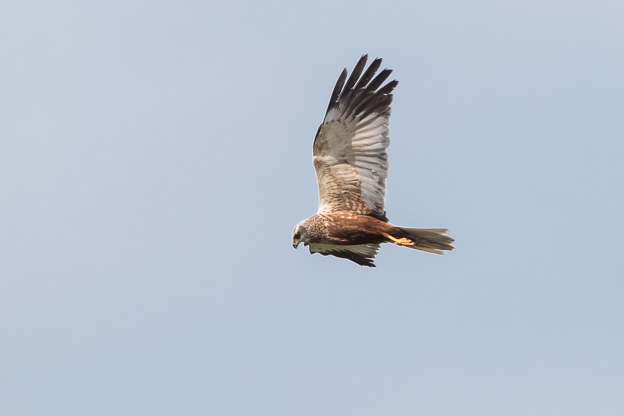 And Ham Wall would not be Ham Wall without at least half a dozen Bittern flights these days. Sure enough, this one tried to sneak past whilst I was poking about in my sandwich box, but the Canon 7D MkII with my new Canon EF 400mm f4 DO II lens just managed to lock on to it before it disappeared behind some trees. 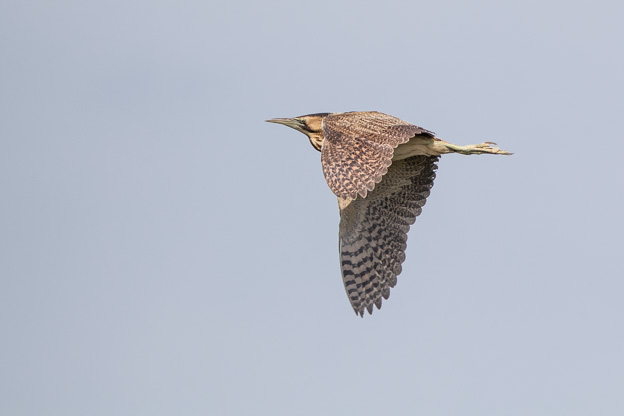 I am beginning to love this camera/lens combination. It seems to be very, very capable and ideally suited to photographing birds in flight. In addition, it is light enough to carry around all day without any strain.

My strategy as a bird photographer is to maintain my mobility and to always have my camera instantly available to grab any passing opportunities. I have made a conscious decision never to buy a lens any heavier than the one I currently have, the 400mm f4 DO II. For ages I lusted after the 500mm f4 (never the 600mm f4 because it is just comically huge!) but I resisted the temptation. It would be impossible for me to lug that heavy lens about for any length of time. Some people carry big lenses in back-packs, which means they can only use them once they arrive at their chosen destination. Others carry them attached to tripods or monopods and sling them over their shoulders - personally I would not trust the attachment hardware not to drop the lens into the drink or on to the pathway. Each to his/her own of course, but I continue to be happy with the choices I have made.

From Ham Wall this blog report moves to the South Coast. It is probably better not to say exactly where at present because this Barn Owl is raising young and there are some really bad people about. I learned my lesson two years ago when I found that a chick had been stolen from a Peregrine's nest that I had been given permission to photograph from a distance. 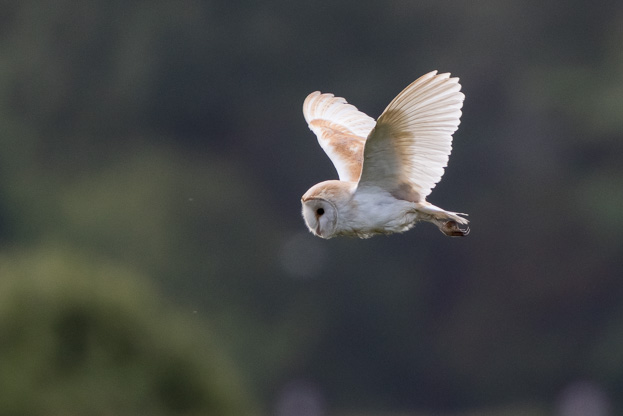 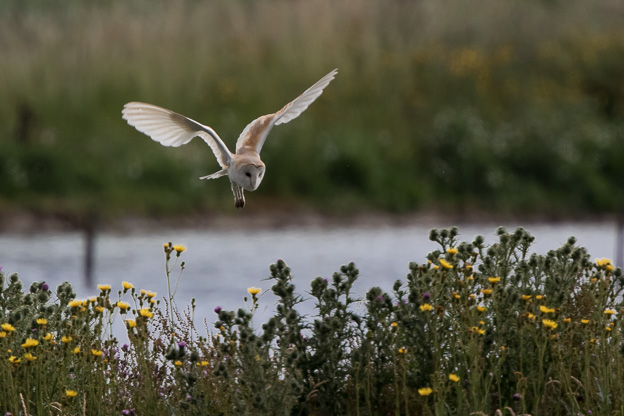 Isn't this shot just the essence of an English Summer, a Barn Owl hunting amongs the giant hay bales. 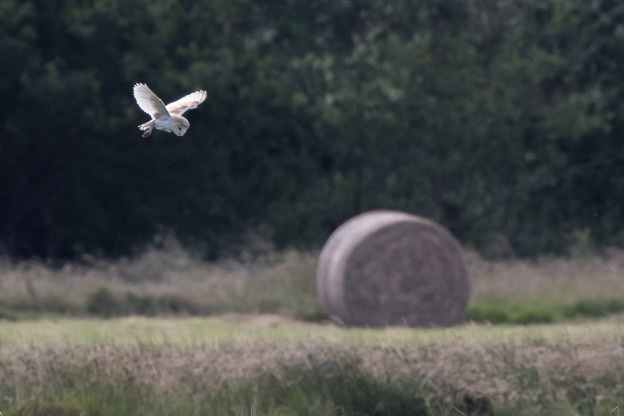 Everyone knows that I cannot resist a good duck, so here is a Shelduck passing overhead. 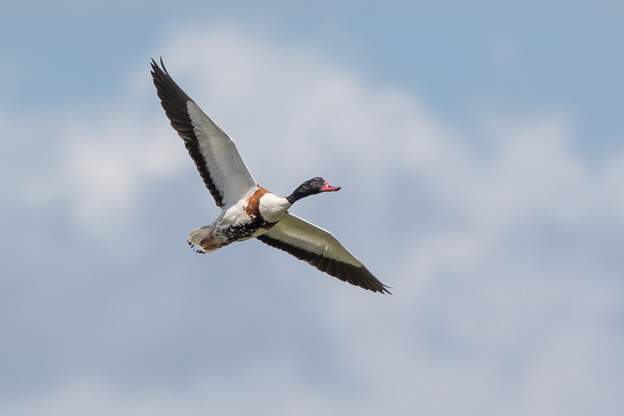 I was interested to see this very pale Buzzard make a fleeting appearance. The French term for a Buzzard is Buse Variable and I can see why. They come in a wide range of shades from almost all dark to almost complete white. The paler ones are often mistaken for Ospreys. 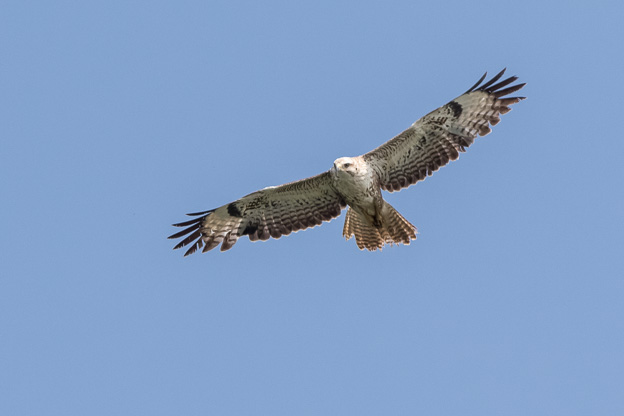 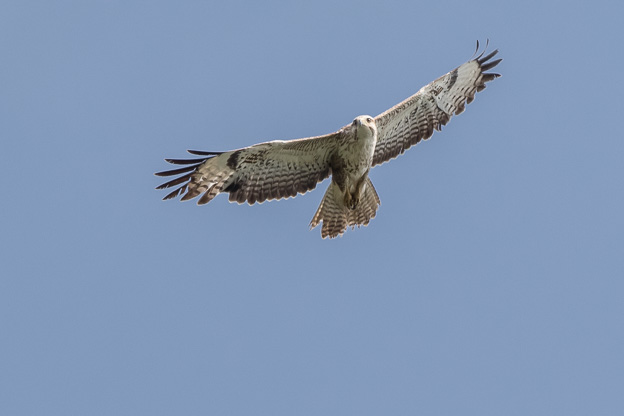 Oystercatchers are a challenge to photograph in flight. This is the best that I could do on this occasion, but I will be trying again. 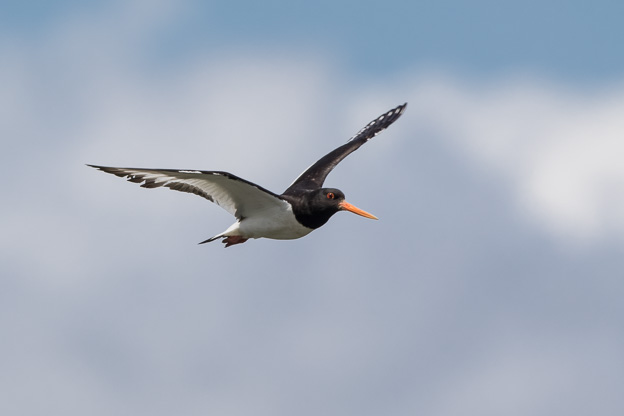 Then, by way of a change, I spotted this Grass Snake swimming rapidly across a patch of open water. It probably knows that it could end up being something's lunch... 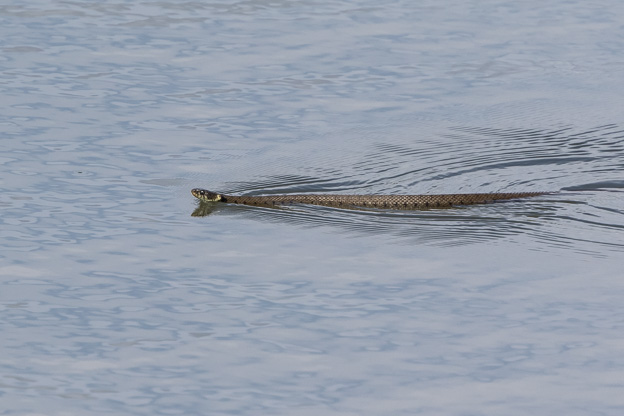 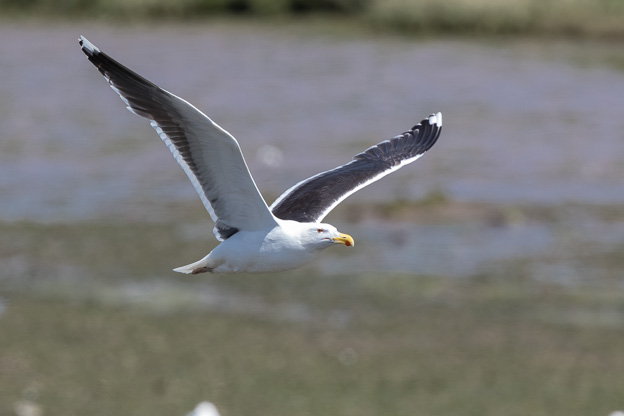 So there we have it for this time. If you like this Blog, please share a link with your friends. The more readers I have, the more keen I am to write for you all.